All articles tagged with "Smother Fetish"

Mistress Jardena smothers guy and masturbates on top of him

This mistress was defamed but she chose not to pursue the damages in court and instead she took up the matter with the guy and she punished him for it. She used her big ass to smother him and to teach him never to make such a mistake again. The mistress choked him a little and let him pee on himself a little before she let him go. He had learned.

Mistress Nikki did not like the way this gym instructor looked at her. She felt that he was not being professional and she had to punish him. He had to focus on helping her work out and on wanting to sleep with her. That is why she had to smother him and dominate him to show him that she was not interested in having anything remotely sexual with him. He understood. 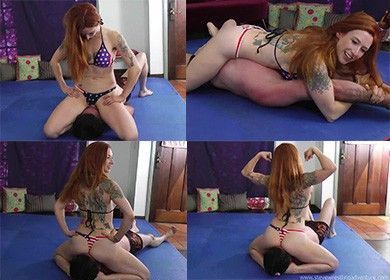 Mistress Lola is someone who gets angry easily and today was one such day for her. She took out her stress on this loser and she dominated him cruelly because he was negative and she did not want any negativity on her. The mistress facesat on him and made sure he choked and that he licked her sweaty and smelly ass before she was done with him. She knew he had learned.

Mistresses gang up on classmate and humiliate him

Mistress Megan and her classmates mistresses Aqua, Bea and Lola felt that they wanted to dominate the guy and teach him to stop being a spy. The mistresses facesat on him and smothered the shit out of him. He cried and wished he had never spied on them but it was too late and he had to endure the consequences of his actions. The mistresses even recorded what they did to him so as to use it to humiliate him if he did not change.

Mistress smothers guy to make him shut up

This mistress was tired of how much this guy talked. He never knew when to shut up and he became a bore too soon. She did not want to continue listening to him so she did what she does best and she used her smothering fetish to shut him up. He was humiliated but at least he knew why he was being humiliated because the mistress told him in plain and simple terms.

Mistress Zephy was out to dominate this guy and she did it with her bare ass. The mistress went ahead to force this guy to lick her ass as well as do the same to her pussy even as she smothered him and choked him in the process. The mistress told him that if he licked her well despite what she was doing for him, she would let him go.

This guy had top intelligence he needed to share with these mistresses and they were growing impatient with him. They could not wait any longer and they used trampling fetish to deal with him. He was trampled and smothered under water to choke him and to make him talk. The scared guy did not last a few seconds before he told them all that they wanted to know from him.

Mistress Madlen was shocked to learn that she had a rude slave and was sure that if she did not nip that behavior in the bud, she would find herself stuck with a slave she could not control. That is why she chose to use her smothering and facesitting fetish to choke him. He was shocked and he cried as she did her thing to him. He tried to apologize but it was all in vain.

Mistress Medea felt that her husband needed to learn to fight fair and since he did not, she had to teach him to do it. The first thing she had to do was to punish him. He was humiliated by being smothered. Her ass was on his face and she did not care how he felt. He was nearly choking but she did not really care about it. He had to learn from that experience.